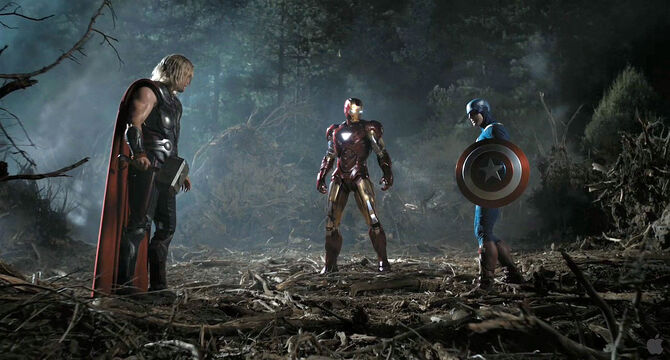 "Initiation (Part 1)" is the first episode of the first season of One Galaxy. It depicts the formation of the Avengers Initiative.

"After the events of Harlem, the World Security Council orders Nick Fury and SHIELD to capture and contain Bruce Banner aka the Hulk. In respone, Nick Fury assembles a group of remarkable people to counter the threat of the green monster."

After the near destruction of Harlem, the World Security Council summons SHIELD (Strategic Homeland Intervention, Enforcement and Logistics Division) Director Nick Fury. They discuss the rogue soldier who transformed into an Abomination and the Hulk's global threat. The Council then orders Fury to capture and contain the green monster. They approve Fury's earlier proposal, Project Avengers Initiative.

After meeting the Council, Nick Fury pulls Agent Phil Coulson out of duty to start recruiting the proposed members of the team.

In South America, Steve Rogers aka Captain America, who has been working for SHIELD nearly a year after being awakened from suspended animaton, is sent to retrieve a weapon known as the Zodiac. He sneaks inside a warehouse and defeats all the guards.

He then engages the mercenaries' leaders Batroc and Machete. In the battle Batroc tries to escape, leaving Machete to fight Rogers alone. Batroc takes the Zodiac but is captured by a SHIELD strike team, Rogers' back up. Meanwhile, Rogers defeats Machete in combat.

After a successful mission, Rogers returns to SHIELD HQ where Director Fury approaches him and invites him to the Avengers Initiatve.

In New Mexico, Thor, who just recently returned from Asgard, helps the people rebuild the damage done by the Destroyer He is reunited with Jane Foster, Erik Selvig and Darcy Lewis.

After learning of Thor's return, Agent Coulson along with Agent Jasper Sitwell visits New Mexico. They meet up Thor and tries to recruit him. Thor agreest to come to one condition, double the efforts of SHIELD in helping rebuild the town. Thor is brought to the Triskelion and meets with Steve Rogers and Nick Fury.

Meanwhile, Tony Stark arrives at the Triskelion and meets with Nick Fury, Steve Rogers and Thor to discuss the Avengers Initiative and the Hulk's rampage. Stark is enlightened to meet Rogers after the latter had worked with Tony's father, back during World War II. After a brief conversation, Agent Coulson is informed that Bruce Banner has been found in India.

In India, A SHIELD strike team, along with the Avengers Initiative, arrive and set up a perimeter where Bruce Banner is residing. Stark enters the place and starts to talk with Banner in a peaceful way. The gentlemen had an intellectual conversation where Stark mentions that he is a fan of the Hulk. Stark then, instead of capturing the green monster, invites Banner to come to Stark Industries in hopes of finding a cure or even controlling the Hulk. Fury, talking to Stark through an earpiece, questions Stark’s actions.

Banner as well, questions Stark’s motives, says that he has trust issues. Stark though, gave his word that SHIELD or any other organization would not come near the Hulk and orders Fury and his agents to stand down.

Stark and Banner gets out of the house in a calm manner but a SHIELD agent, without Nick Fury’s orders, shoots Banner. Stark stands tall but hastily heads over his armor as Banner quickly transforms into the Hulk and starts its rampage. Iron Man tries to escape but gets caught and tossed into one of SHIELD’s Humvees.

The strike team starts shooting but Nick Fury orders for a smoke grenade and all agents to clear out. As the smoke distracts Hulk, Mjolnir comes flying in and hits him in the face. Rogers comes in and charges his shield. The Hulk gets angrier and knocks Rogers out. The same happens to Thor. Iron Man swoops in and charges the Hulk with its Unibeam. Rogers argues with Thor and Iron Man about their plan but the two other heroes worked their own plans. As Iron Man keeps blasting Hulk, Thor charges Mjolnir and fires its lightning blast. The blast though, accidentally hits Iron Man.

Iron Man’s power then reaches to 400% and in retaliation, blasts Thor. The Hulk then charges to Iron Man but the latter, again, fires its Unibeam. This time the blast, as Stark ordered JARVIS to put all the 400% power to the Unibeam, knocks out the Hulk. Iron Man though, loses power and shuts down.

Thor then gets back up and tries to pummel Iron Man but Rogers confronts Thor to put the hammer down. Angry of the situation, Thor jumps and tries to pummel Rogers, but when Mjolnir and the Vibranium shield hit one another, a huge blast occurred, ending the battle.

As the heroes stand, Iron Man notices that the Hulk has reformed back to Banner, unconscious.

In a post-credits scene, as the agents bring Bruce Banner aboard their jet, a careful SHIELD agent boards the same, revealing to be the Asgardian God of Mischief, Loki.

The story continues in the next episode.

Retrieved from "https://onegalaxy.fandom.com/wiki/Initiation_(Part_1)?oldid=4085"
Community content is available under CC-BY-SA unless otherwise noted.